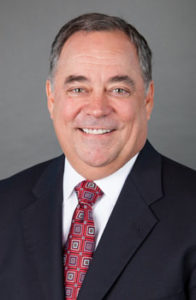 Shareholder Perry Browder is head of the Asbestos Department at Simmons Hanly Conroy. He has worked for more than 30 years helping numerous families resolve hundreds of million dollar-plus cases.

He started at the firm in 2001 and played a key role in helping the firm develop a national reputation. Within a few years, he had successfully secured one of the largest asbestos verdicts in the country, a $250 million verdict against U.S. Steel.

Today, Perry manages the firm’s more than 50 asbestos attorneys who are organized into multiple asbestos trial teams. He oversees all asbestos cases to ensure they are handled in an efficient manner that maximizes results and minimizes hassle for clients and their families, so they can focus on their health.

“People hire the firm for our expertise and our compassion,” Perry said. “Even though we’re one of the largest firms in the country, we treat our clients like family. We are sensitive to their needs and at the same time we have a proven track record of getting results.”

In the case against U.S. Steel, Perry represented Roby Whittington, a 70-year-old retired steel worker, who was diagnosed with mesothelioma after working 30 years for the company. The case eventually went to trial and an Illinois jury awarded a $250 million verdict in favor of Mr. Whittington. While Perry spent hours building the case, he credited the large result to Roby.

“The case was won because Roby was a good man who did everything he was supposed to,” he said. “U.S. Steel angered the jury in that they didn’t take the steps to protect him, even though they knew the hazards of asbestos.”

The verdict was important, Perry said, because it sent the message to large corporations that they can’t treat people as disposable resources and get away with it. It’s a message Simmons Hanly Conroy has continued to send as it’s recovered more than $9 billion in verdicts and settlements on behalf of clients.*