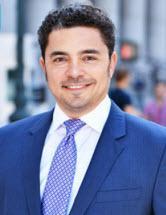 Daniel Wasserberg became a lawyer because he was motivated to assist victims of injustice by fighting corporate entities that value profit over the public’s health and welfare. Fifteen years into his practice, Mr. Wasserberg remains firmly focused on helping people. As a founding partner of his Manhattan based Personal Injury and Mass Torts law firm, his litigation practice is driven by three guiding concerns: consumer protection, environmental advocacy, and most importantly: accountability of companies that harm people for the benefit of their own bottom line.

Nothing gives Mr. Wasserberg greater satisfaction than fighting for those who have personally selected him to advocate their cause. He believes that it is especially important to spend quality time with his clients so that he can get to know them and their individual cases: “Every client is different, and if you don’t know them, then you don’t know what you’re fighting for.”

Daniel Wasserberg has been selected to the New York Metropolitan Super Lawyer list every year since 2013. In 2017, Mr. Wasserberg was named a “Top 100 Civil Litigator” by the National Trial Lawyers organization. This recognition is rarely awarded to attorneys under the age of 40.

Mr. Wasserberg is proud to call himself a Trial Lawyer. He is often a featured speaker at industry summits and gatherings of the nation’s leading attorneys, from both sides of the bar. He is recognized by both his peers and his adversaries and is considered one of the nation’s premier mesothelioma and negligence attorneys.

He makes it a point to attend conferences with the front-running plaintiff’s attorneys so that he stays aware of new developments in the field and continues to develop the firm’s network of the best and brightest co-counsel all over the country. This network of attorneys gives Meirowitz & Wasserberg, LLP the capability to fight for justice on behalf of individuals throughout the United States, and even internationally.

Mr. Wasserberg is originally from Houston. He has been or is a member of the Texas Trial Lawyers Association, New York State Trial Lawyers Association, and the American Association for Justice. In 2004, he was admitted to practice law in Texas. In 2010, his practice privileges were extended to the State of New York, and in 2018, he was admitted to practice in the State of New Jersey. He is admitted to practice before the U.S. District Courts in the Southern and Eastern Districts of NY and the Northern District of IL. Mr. Wasserberg is the holder of a Juris Doctor Degree received in 2003 from Indiana University School of Law, as well as a Business Certificate and a Bachelor’s Degree from Indiana University.